Yuichi Shimazaki has received his Doctorate degree in Science from Nagoya University in 2000 under the supervision of Professor Osamu Yamauchi. He joined Professor Yoshinori Naruta’s group at Kyushu University as Assistant Professor and worked on the redox behavior of various metal porphyrin complexes as models of the active site of metalloenzymes. In 2008, he was promoted to Associate Professor at the College of Science, Ibaraki University. His research interests include the oxidation chemistry of the complexes of various metal ions, model studies of metalloenzymes, bioorganometallic chemistry, and weak interactions in metalorganic
molecule systems.

Chemistry of redox active transition metal complexes with pro-radical ligands and their detailed electronic structures have been actively pursued in recent years. An “experimental” valence state in metal complexes is sometime different from the “formal” oxidation state, especially in the species having redox active ligands. This difference can be also seen in biological system, such as iron(IV)-porphyrin p-cation radical in some heme proteins and copper(II)-phenoxyl radical in galactose oxidase (GO). Many efforts for determination of the experimental oxidation number have been close to the goal of the “truth oxidation state” in various oxidized metal complexes with redox-active ligands. Depending on the relative energies of the redoxactive orbitals, metal complexes with the redox active ligands exist in two limiting descriptions, either a metal-ligand radical (Mn+(L•)) or a high valent metal (M(n+1)+(L-)) complex. The reaction mechanisms of artificial and biological catalysts depend on the electronic structures of the high valent intermediates. However, geometric and electronic structural characterizations of the high valent species have been rare due to their stability. Recently, some artificial metal−phenoxyl radical complexes as models of GO have been synthesized and successfully characterized by X-ray crystal structure. The one-electron oxidized metal-phenolate complexes showed various electronic structures depending on small perturbations, such as substitution of the phenolate ring and the chelate effect of the phenolate ligands and so on. In this presentation, I will focus on X-ray crystal structures of the oneand two-electron oxidized metal(II)–phenolate complexes (Ni(II), Pd(II), Pt(II) and Cu(II)) with Schiff base ligands of 2N2O donor sets. Especially electronic and geometric structure relationship such as differences of metal-phenoxyl radical and highvalent metal phenolate complexes, and the effect of different oxidation locus of the radical electron on the ligands in oxidized forms will be discussed.

Virginie Vidal obtained her Ph.D from Paris Sud University. She then pursued postdoctoral appointments in the University of Montreal (Canada). She is currently CNRS Research Director at Chimie ParisTech in Paris. Her research interests focus on transition-metal catalysis, metalloorganocatalysis and organic synthesis. The synthesis of bio-relevant targets is also a focus in her group. She was Chair of the Division of Organic Chemistry of the French Chemical Society (2009-2012). She has published more than 150 papers in reputed journals, chapters and patents and has been serving as a board member of EuCheMS Division of Organic Chemistry since 2010.

Over the past few years, significant research has been directed toward the development of new methods for synthetic efficiency and atom economical processes. Among them, the potential of transition metal-catalyzed reactions has been steadily demonstrated, as they provide a direct and selective way toward the synthesis of highly valuable products. We focus on the development of catalytic methods for the synthesis of bio-relevant targets. More specifically, we have been interested in hydrogenation and transfer hydrogenation reactions, which provide important catalytic approaches to fine chemicals. There is no doubt that chiral ligands are at the heart of any enantioselective homogeneous process. In this context, our contribution to this field is the development of atropisomeric diphosphanes named SYNPHOS and DIFLUORPHOS with complementary stereoelectronic properties. Some applications in organic chemistry will be presented. 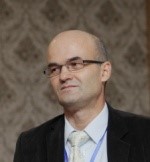 Ionel I Mangalagiu is a professor of organic and medicinal chemistry and Vice-Rector with research at “Alexandru Ioan Cuza” University of Iasi, Romania. Previously, he has served as Dean, Vice-Dean, Head of Organic Chemistry Department, etc. at Faculty of Chemistry. He has nearly 30 years of experience in the research, focused in the area of Heterocycles Compounds. He has over 150 papers, 13 patents, 3 international chapter books, etc. He was Visiting Professor and/or invited speaker to prestigious foreign universities (Ludwig Maximilianus University Munchen and Technische Universität Braunschweig, University of Florence, Universite D’Angers), awarded with numerous prizes and honours: DAAD and NATO award, “Costin D. Nenitescu Medal” (Romanian Society of Chemistry), “Al.I.Cuza University Award in Research”, Special Award of Croatian Association of Inventors, etc.

Over the past decades, nitrogen heterocyclic derivatives, especially five and six member ring, were reported as valuable scaffolds in medicinal chemistry, showing variously biological activities such as antiviral and anticancer, antituberculosis, antimicrobials, antifungus, anti-inflammatory, antihypertensive, diuretics, antithrombics, anticoagulants, antidepressant, anxiolytics, anticonvulsant, analgesic, etc. As part of our ongoing research in the field of nitrogen heterocyclic derivatives, we present herein some core results obtained by our group in the field of nitrogen heterocycles derivatives, focused on chemistry and their pharmacological potential applications as anticancer, antituberculosis and other antimicrobials, leishmaniasis. Our design has had in mind to get compounds with at least two biological activities.
As far for anticancer activity, several classes of nitrogen heterocycles (diazols, fused azine and diazine, mono- and bisindolizines, 1,10-1,7-and 4,7- phenanthroline) was designed, synthesized, and tested. Some of the compounds have a significant and selective anticancer activity against Melanoma, Renal cancer, Brest cancer and Lung cancer. As to the mechanism, our classes of compounds belong to DNA-intercalators, either via covalent bonding interactions (alkylators) either via non-bonding interactions (intercalations between base pairs, minor/major groove binding, G-quadruplex interactions).
The molecular docking experiments suggests important clues concerning the mechanism of actions of our five and six member ring azaheterocyclic derivatives. Design, synthesis and antimycobacterial activity of some new classes of nitrogen heterocycles (namely azine and bis-azine, diazine and bis-diazine, mono- and bis- indolizines, phenanthroline) is presented. The primary cycle high throughput screening reveals that some compounds are potent inhibitors against Mycobacterium tuberculosis (Mtb), their antitubercular activity being superior to the second-line antitubercular drug Pyrimethamine and Cycloserine. The MIC, MBC, LORA, intracellular (macrophage) drug screening, and MTT cell proliferation, indicate, for some of our compounds, the intracellular drug effectiveness against Mtb, the lack of toxicity, a significant activity against both replicating and non-replicating Mtb, a bactericidal mechanism of action, excellent solubility in microbiological medium. For the most active compounds, a complete ADMET studies have been performed (these including Plasma Protein Binding, Caco-2 Permeability, Cytochrome P450 Inhibition, In vitro microsomal Stability, HepG2 Cytotoxicity) with very good and promising results. Design, synthesis and antileishmanial activity of several classes of nitrogen heterocycles (fused and nonfused diazine and diazols) is presented. The antileishmanial assay against Leishmania donovani intramacrophage amastigote reveal a very good and promising activity for some compounds.
Acknowledgements. Authors are thankful to the POSCCE-O 2.2.1, SMIS-CSNR 13984-901, No. 257/28.09.2010 Project, CERNESIM, for the NMR and X-ray spectra. Funding for this research was also provided by UEFISCDI within the project CNFIS-FDI-2018-0102.

Title: Synthesis of selected pyrazine derivatives and their photopyhsical characteristics

Zanariah Abdullah has obtained her PhD from Queen Mary Collge, Unversity of London. She is involved in Organic Chemistry for almost 30 years. Her research interest is in synthesis of fluorescent compounds and application in surface chemistry, ionic liquids and also in biological activities studies. She is currently Dean of Faculty of Science, University of Malaya, Kuala Lumpur, Malaysia.

2-Phenoxypyrazine, 2-o-methyphenoxypyrazine, 2-m-methylphenoxypyrazine, and 2-p-methylphenoxypyrazine were obtained when 2-chloropyrazine was treated with phenol, o-cresol, m-cresol and p-cresol respectively. Reactions of
2-choropyrazine-5-carboxylic acid methyl ester with phenol, 3-methylphenol and 3-nitrophenol gave 5-phenoxypyrazine- 2-carboxylic acid, 5-m-tolyoxyprazine-2-carboxyclic acid methyl ester and 5-(-3-nitrophenoxy) pyrazine-2-carboxyliic acid methyl ester respectively. 2.5-Dimethyl-3-phenoxypyrazine was obtained when phenol was reacted with 3-chloro-2,5-dimethylpyrazine. Naphthalenyloxy derivatives were obtained when 2- chloropyrazine reacted with 1 and 2- naphtol respectively. The structures of newly synthesized compounds were spectroscopically characterized. Fluorescence studies showed that compounds 2, 4 and 8 quenched in the presence of oxygen. Compounds 1 and 7 showed the highest fluorescence intensity in alkaline condition. Compound 1, 4 and 8 exhibit the highest emission wavelength in non-polar solvents and falls drastically in polar aprotic solvents. Highest fluorescence intensity was recorded with compounds which have electron donating substituents and has rigid structure.

Sigridur G Suman has completed her PhD from University of Michigan, and Post-doctoral studies from Stanford Research Institute. She is an Associate Professor at the University of Iceland, and Founder of a biotech company, MV ehf in Iceland. She has published more than 10 patents and several research articles.

Sulfur abstraction reactions are important reactions in heterogeneous catalysis. Their main function is to remove sulfur from petroleum to boost energy value of oil based fuels and to prevent fouling of the catalysts used for catalytic converters in diesel. Catalysis of such sulfur removal is commonly achieved through use of heterogenous catalysis where molybdenum based catalysts with sulfur moieties make up the catalytically active sites. We synthesized a series of molybdenum compounds with terminal disulfide ligand and studied the heterogeneous catalytic abilities of these compounds in a sulfur abstraction reaction of propylene sulfide, with respect to the compound structure. The compounds were all catalytically active although sluggish. The sluggish behavior was explained by interesting details that were revealed by a combination of the solid state properties and a proposed catalytic cycle.

Rong-Jie Chein has completed his PhD from National Chiao Tung University and Postdoc from Harvard University. His field of research includes: Development of new synthetic strategies and methods, Total synthesis and the study of the chemistry and biology of natural products and designed molecules, Drug discovery.

Chiral sulfur ligands are becoming a versatile tool in organic chemistry due to the blossomed development achieved in the past years. This presentation describes an expeditious and efficient preparation of enantiopure (thiolan-2-yl)diarylmethanols and the applications of their derivatives to the catalytic and asymmetric Corey-Chaykovsky epoxidation, the imino Corey-Chaykovsky aziridination, the Corey-Chaykovsky cyclopropanation, as well as the first oxathiaborenium catalyzed asymmetric Diels-Alder reaction.

Dorina Amariucai-Mantu is a Lecturer at Alexandru Ioan Cuza University of Iasi, Romania. She has completed her PhD and Post-doctoral studies at the same university. She has published more than 25 papers in reputed journals and has been serving as an Editorial Board Member of repute.

Leishmanisis is a parasitic disease which affects over one million people worldwide. It is transmitted by certain types of sandflies and is closely associated with poverty. The most common form of the disease is the cutaneous leishmaniasis. Current treatments, including pentamidine and imidazoquinolines, are used for treatment of cutaneous disease; however, they have some limitations due to their toxicity, relatively high cost and drug resistance. Nitrogen heterocyclic compounds are invaluable constituents of molecules with various biological importance’s, being essential components in drug designing programs. The emphasis of the current research work consists the design, synthesis, characterization and antileishmanial activity evaluation of a new class of nitrogen heterocyclic derivatives, new bis-pyridazine molecules (BP) and structurally related to pentamidine. Three new classes of BP-derivatives were designed (BP I-III), their synthesis being straightforward and efficient. The BP-I derivatives were obtained through an N-alkylation of the starting BP heterocycle, which subsequently, by substitution with hydrazine conducted to BP-II derivatives. A final condensation with aromatic aldehydes yielded the BP-III class of compounds.